Another year, another Google I/O. Another set of articles with “what’s new in xyz Google product”. Maps, Photos, AI, this, that. And then all those Android P features which nearly no one will see on their phones (tablets look like dead part of market already).

I have a feeling that this part is more or less useless with current state of Android. Latest release is Oreo. On 5.7% of devices. Which sounds like “feel free to ignore” value. Every 4th device runs 3 years old version (and usually lacks two years of security updates). Every 3rd one has 2 years old Nougat one. 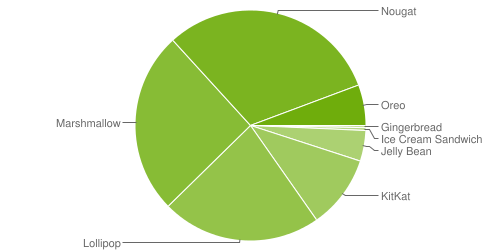 How many users will remember what’s new in their phones when Android P will land on their devices? Probably very small part of crazy geeks. Some features will get renamed by device vendors. Other will be removed. Or changed (not always in positive way). Reviewers will write “OMG that feature added by VENDORNAME is so awesome” as no one will remember that it is part of base system.

In other words: I stopped caring what is happening in Android space. With most popular version being few years old I do not see a point in tracking new features. Who would use them in their apps when you have to care about running on four years old Android?