Another week of conference passed. This time I was at Linaro Connect q2.12 which took place in Hong Kong Gold Coast hotel.

As usual everything started with packing. I have a list for it so it is usually quick job but you know — I was going to Hong Kong, world capital of cheap electronics so better have some space available just in case. So I borrowed bigger bag from friend, put some Linaro stickers on it (to be able to find it at baggage claim) and put all my stuff inside. Of course travel things went to backpack (have to buy more comfortable one). 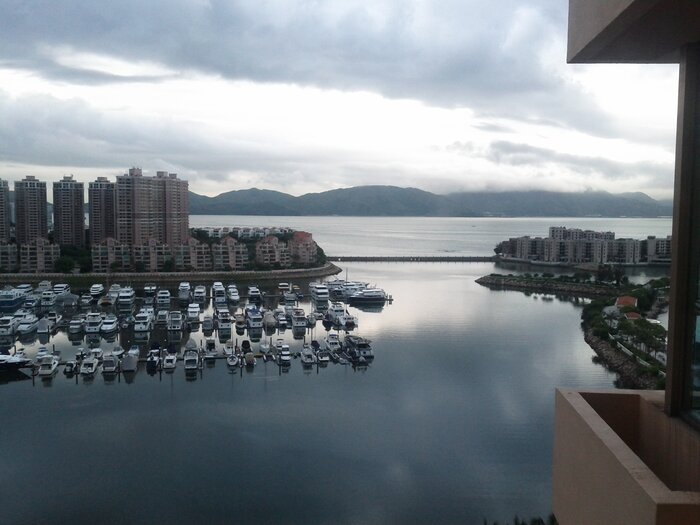 Monday went with meeting people, sessions (scheduled and random ones) and some hacking. At end of day we had usual “meet & greet” dinner which was rather “seat & eat” style as we had it in room where we has lunch and there was not enough space to walk and discuss with people. For this I prefer UDS style where you have few points with food/drinks, lot of walking space and some tables here and there so you can grab something to eat and chat with many people during one evening.

Speaking of food… It was great! Breakfasts offered wide choice of Chinese, Japanese, Singapore food with Western options available too (some sausages, boiled eggs, British beans). Add fruits, sweets and all what was there to make sandwiches… Lunches were even more mixed. Something local, something European, salads, sweets — all that made me a bit heavier on return trip :D

Many people were surprised by lack of soda options as only coffee, tea and bottled water were available daily. For me it was not a problem as coffee + water were more than enough.

But back to sessions. There were many ARMv8 (aarch64-gnu-linux) sessions. I attended one of them where we discussed about building cross compilers, bootstrapping distributions etc. As rest of ARMv8 ones this was not broadcasted or recorded. Rest of sessions used Google Hangouts for remote participation. It worked well even with last-minute changes from Google which terribly broke setup we used for earlier Connects. I was on session where leader (Wookey) was remotely so we had “big brother is watching you” effect: 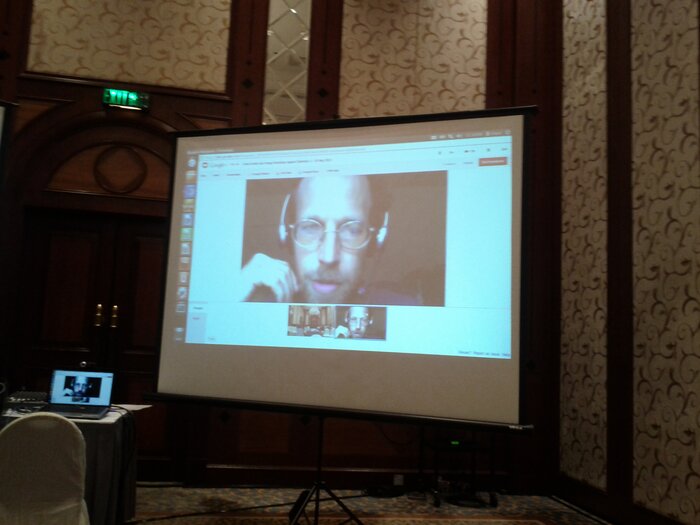 Have to admit that this method of remote participation helps as users can just ask questions instead of relying on someone following IRC channel. But it is also limited to who can join so no use for conferences like UDS.

For me interesting sessions were ones around CI process. We have few such systems and each has different use. There is LAVA which gives us ARM boards to run tests on, Jenkins to run builds on x86 instances (Amazon EC2 like). Toolchain Working Group has “cbuild” which they use to build and test toolchain on x86 and ARM machines. And then there is also Launchpad which has daily builds from selected Bazaar branches. We had discussions about merging them and/or sharing resources (like a way to borrow ARM boards from LAVA to run cbuild). Hope that we will get something interesting from it.

But sessions are not the only thing to do. There are also after work activities. We got coaches available on Tue/Wed/Thu to Tsim Sha Tsui (TST in short) district, The Peak (Tue only due to cloudy weather) and somewhere else. I went to TST on Tuesday and we just walked around it, got some food (chopsticks only so we decided to not ask for cutlery and handle it — we managed) and for fun visited one of those shops with “TAX FREE” signs (which in tourist language means “YOU DO NOT WANT TO BUY HERE”).

On next day I went with Zygmunt Krynicki to Golden Computer Shopping Center near the Sham Shui Po station. Lot of computer shops compressed in small area. Everything from SSDs, mainboards etc to normal and weird cables. In one shop I asked for 0.5m long HDMI cables and got them so expect soon post about adding HDMI switcher to my devboards setup. Decided to not spend money on anything more expensive as there is no warranty that it will work and I do not want to ship hardware back to Hong Kong when it fail.

Thursday we want for team dinner. But before we decided to take a ferry from Avenue of Stars to Hong Kong Island and go for ice cream there: 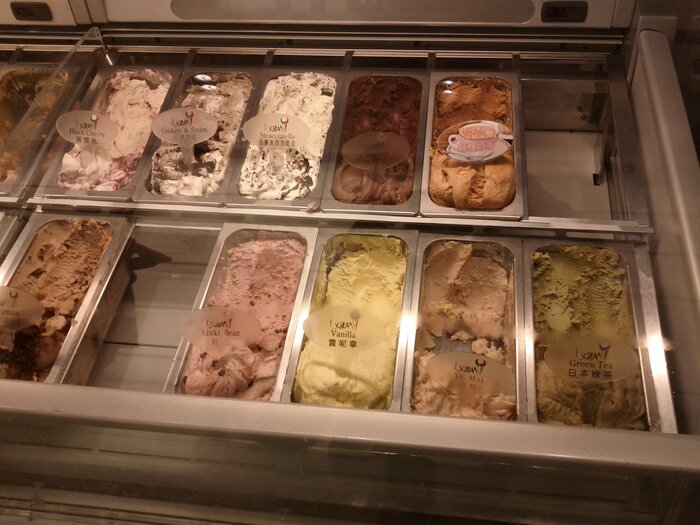 I went for ginger and green tea flavours as both sounded crazy enough and I am sure that will not find them here in Poland. Ginger one was great (even if I do not like ginger) but green tea one was awful — tasted like concentrate of concentrated tea. 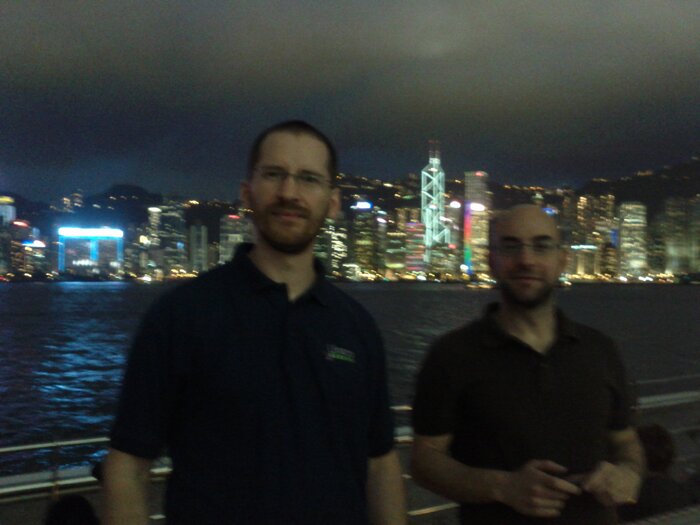 Then we went to “Spring Deer” restaurant. Crowdy, long queue (even with earlier registration). As usual in Hong Kong I had to watch my head in few places. When we got table it looked like disaster but got cleaned quickly and were served with food.

For start they give us some oiled peanuts so we had interesting challenge as a way of practising eating with chopsticks. We ordered some pork, fish, vegetables and duck. 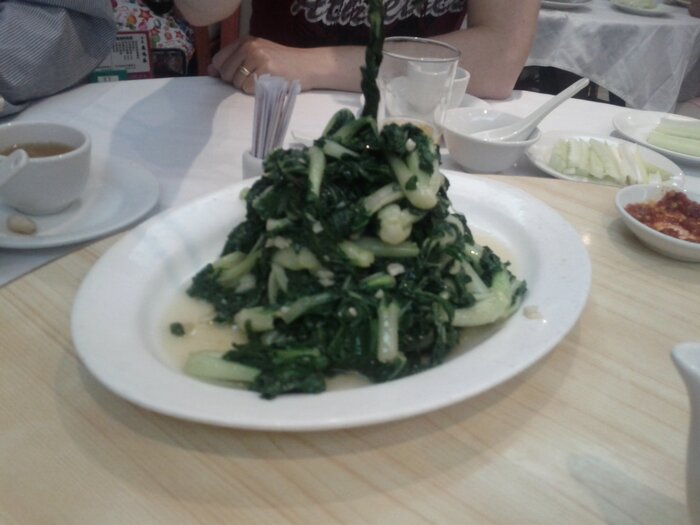 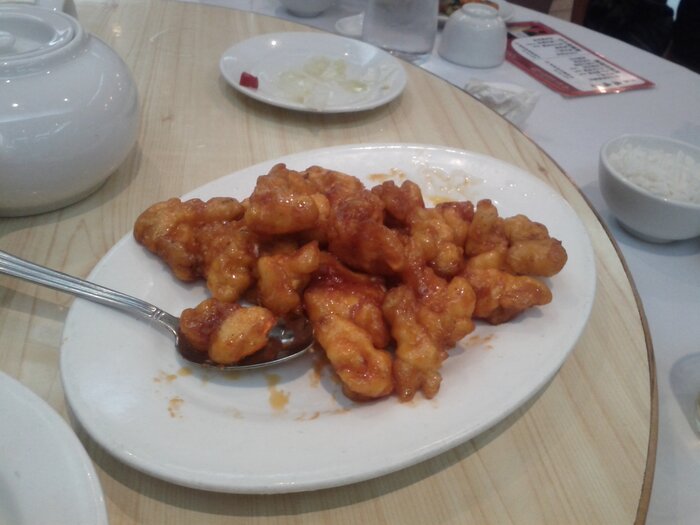 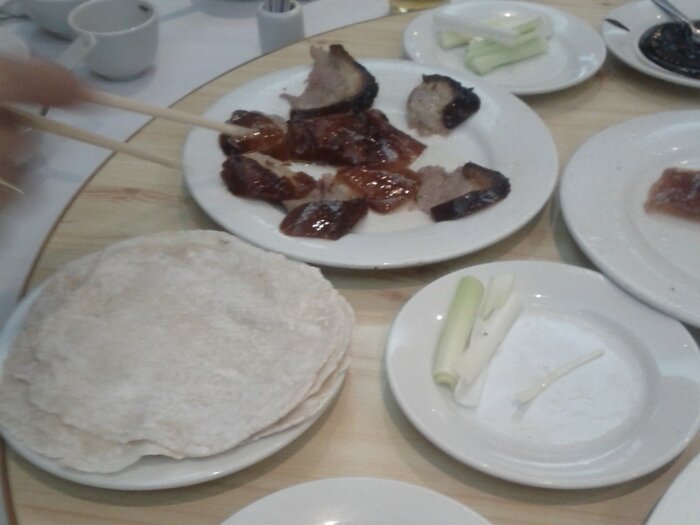 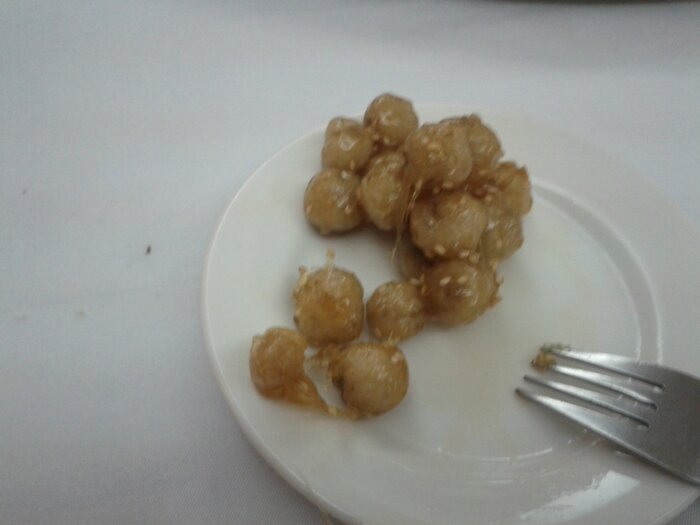 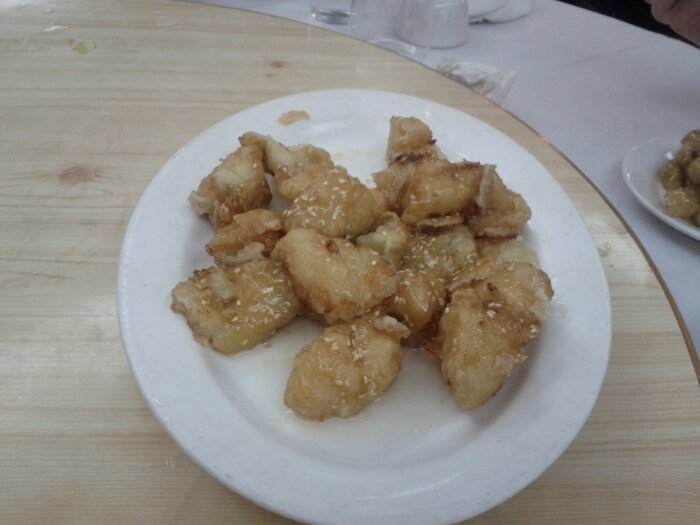 After dinner we were able only to grab taxis and go back hotel ;)

Friday was my last day there. During packing bag I realized that this is my first conference when do not have any extra hardware (cables do not count). But I hope that sooner or later I will put hands on some kind of ARM server hardware (maybe one node Calxeda board which I heard rumours about). As there were nearly no sessions I went to one of hacking rooms for coding and got my patches reviewed by Matthias Klose — have to work on few of them, some were described as “have to merge as look ok”.

After lunch we had usual “Demo Friday” where people presented work of miscellaneous Linaro (but not only) teams. One of interesting ones was comparison of ASOP build of Android 4.0.4 contra Linaro build which was present on two same Pandaboards. Both were running 0xbench and results were cleanly visible. Changes are in review and on a way to ASOP tree (due to usual “Upstream, upstream, upstream” philosophy of Linaro).

Day ended with dinner in Chinese style. Food was good and interesting — especially when we were trying to find out what menu entries mean ;) There was a show of Chinese “Bian lian” art with a guy changing his masks. I was wondering for a moment how we did that but did not bother with it too much.